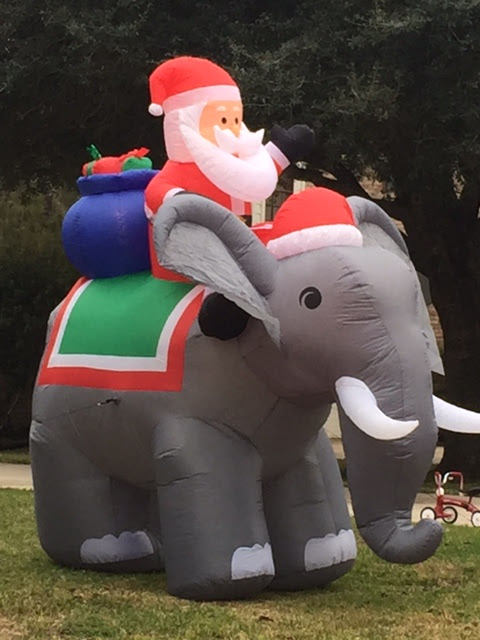 One of the yard displays near me.

I have no idea why the neighbor wanted Santa to ride on an elephant. Does the elephant make Santa a Republican? Nope. No more than riding into Jerusalem on a donkey makes Jesus a Democrat. Neither Santa or Jesus were members of political parties.

Santa's cute sitting up there on the elephant, but we usually expect him with reindeer. 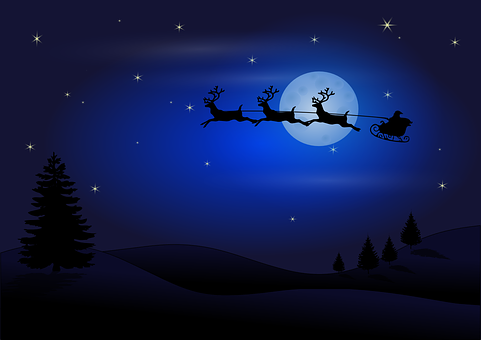 Of Course all modes of transport will do.

Ads on TV show him in fancy red sports cars. No matter the transportation, Santa's day is coming fast. 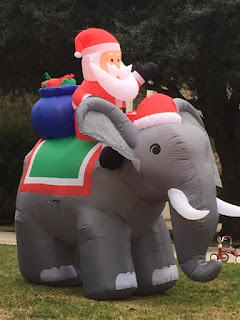 I'd never given much thought to elephants until I saw a beautiful, painted image of one on my doctor's wall.  My physician was born in India and has a lot of India decor in his facility. I asked him once about the elephant painted on his wall. He said it represented a higher power. He explained that the higher power does the healing and doctors get the credit.

I agree. Except for one thing. My higher power is the Holy Trinity, not an Elephant. I told him as much. He's a great guy and a dedicated healer. He smiled, nodded, and then agreed with me. He believes in the higher power, but I'm afraid his power goes by the name of Ganesh.  The elephant image on his wall represents the Hindu god Ganesh. People believe this deity removes obstacles.

I've read that one reason elephants are chosen for a symbol of healing is that they embody strength. They certainly do that. Removing a physical obstruction as big as a boulder is no problem for them.  They are huge, strong animals. Another thing...they've always been connected to royalty.

Christians believe the most powerful figure ever given to mankind came as a baby. Tiny little God/Man. Not big like an elephant. Just a baby who is the Son of God. He is our higher power.

How will Santa arrive at your house? By sleigh? Car? Elephant?

However he gets there, I'm wishing you a Merry Christmas and hoping you give one of my books as a stocking stuffier.