Hi Everyone,
I'm thrilled to announce that I've signed my second three book contract with Prism Book Group.
Two of my books are available now, Sarah: A Mission of Love, and Sarah: Laney's Angel.  The third book will be available before Christmas.  The title is Sarah and the Widow's Mate.  It's a lovely story about a rich widow with too many unsuitable suitors.
Books four, five and six will be more of Sarah's misadventures.  Sarah will spend an entire summer trying to help humans find mates.  Just wait till you see what she does!
Prism is a wonderful home for authors.  Everyone here supports each other and we write clean, uplifting stories. I invite you to check out our website. http://prismbookgroup.com/  Prism features three distinct lines of fiction: Inspired, Diamond, and Illuminate.  I write under the Inspired line. Prism will release several new titles in the next several weeks.

Both these books have been on Amazon's best seller list.  Sarah: A Mission of Love is now .99 cents at Amazon on Kindle and has been on the best seller's list since May, 2013.  Sarah: Laney's Angel is only $2.99.  Both are available in print or eBooks.  Lots of humor and easy reading.
***

AUTHORS, do you have a deal that you’d like to share? Would you like to
have your title featured on a free promotional blog? eFiction Finds is
seeking books considered clean reads priced at under $3.00 that have at
least ten reviews on ...Amazon, with an average rating of 4.0 or higher, to
share with our readers. Read more on how to submit here:*

http://www.efiction/ finds.com/ p/author- corner.html http://www.efiction/ finds.com/ p/author- corner.html>
***
eFiction Finds is a site posted by Prism.  The site features books that are either free, or value priced.  All books are checked for good reviews, multiple stars, and clean, unplifing stories.  Place this site into your list of favorites when you need a good book.
I’ve found some great reads via eFiction Finds. Recommend following them! www.facebook.com/efictionfinds


Free & affordable fiction for your Kindle! Follow us for daily listings of enjoyable, highly rated
books!

Even in laughter, the heart may ache, and joy may end in grief. Proverbs 14:13, NIV


When do you look forward to an ending?
I write romance, and in this genre, Cinderella endings are expected.

When I completed a non-writing project last week, I heaved a huge blissful sigh of relief, but closure is not welcome in all circumstances.


Several farewells came to my attention this past week and few produced happily-ever-after, halleluiah finishes.  When modifications in relationships or circumstances occur, our departures often contain a mixture of poignant, angry or sad emotions.
I heard Rush Limbaugh a few days ago talk about parting with his beloved pet. He loved the little cat and found it difficult to tell the audience about his loss.   When my mom’s adored cocker spaniel died, she vowed to never again love another animal.  For her, a potential devotion failed to merit the unimaginable grief of a future bereavement.


A woman emailed me yesterday and reminded me of a three year anniversary—the date her marriage ended in divorce. Although time healed most of her wounds, a song or a photograph still haunts her mind.
During a conversation with a man this last week, I learned he waited for a phone call to determine if his job would be terminated.

Last night, a teenager phoned. I could barely understand the conversation for her sobs. “I can’t take this relationship any longer. What can I do?” Leaving a friendship is not easy even though it is the best for all involved.


One of my dear friend’s husband succumbed after a long illness.  Have you read The Long Goodbye by Raymond Chandler?  The author penned it during his wife’s extended illness. Knowing everyday may be the last with the love of your life brings about an indescribable pain.
Today I say goodbye to my physician—the best one I ever had. Changes in government policies and regulations triggered him into early retirement. This man, with God’s help and direction, restored me to health many years ago when circumstances looked as though such a thing could not be possible. How can I express my gratitude when I hug him the final time?

We cope with loss in our own way. Some people lose weight—others gain pounds. A few turn to alcohol or drugs. Certain folk take to the bed while others bury themselves in a flurry of activity. Several blame God—or maybe themselves for the monumental emptiness.


Under most circumstance, goodbye is not a welcome word to extend to those we care about—even if it is for the best. We do not welcome a change or loss in our financial situation.
It’s just part of life.

How we respond to it is our choice.


“I have seen something else under the sun: The race is not to the swift or the battle to the strong…but time and chance happen to them all.  Moreover, no man knows when his hour will come.” Ecclesiastes: 9:11-12
Posted by Gay N Lewis No comments:

Does your church need to be turned upside down?


Should your church be turned on her side?  Or maybe upside down? Perhaps your congregation hums along and reaches people through various ministries.  No need for improvement.  However, a few churches need a new position. 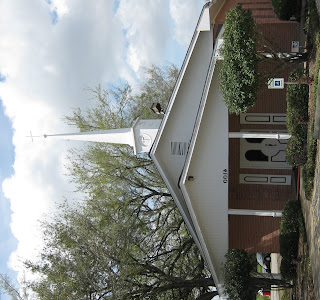 “It’s never been done that way.”
“Mrs. Busybody will object.”

“It will cost too much money.”


“We like it the way it is.”
“If the Lord had wanted it that way, He would have done it that way.”


Have you heard these comments from people in your congregation?  Refusals to try a new method often meet resistance, but if the old ways aren’t working, why not try the new?


Here’s a book by pastor Mark Buchanan to make you think about the way your church functions.


'These men who have turned the world upside down have come here also.' — Acts 17:6 That was the startled cry, circa 50 AD, from a hastily assembled mob in Thessalonica. Paul and Silas had been arrested for preaching the gospel. They were viewed as revolutionaries, dangerous men who were upsetting the status quo and inciting riots. But they were just two ordinary men, walking in the power of God, sharing a simple message of his love and grace. It's been a while since we've seen the likes of this. If you ever find church boring or you believe something is missing from our churches today, you aren't alone. Mark Buchanan believes there is a visible gap between the life Jesus offered to us and the life we're living, between the church Jesus envisioned and the church we see today. When Jesus announced that the Kingdom was at hand, this can't be what he meant. Instead of counting everything loss to be found in Christ, we've made it our priority to be safe instead of dangerous, nice instead of holy. Author and pastor Mark Buchanan believes that we need to recover a simple idea: that God meant his church to be both good news and bad news, an aroma and a stench — a disruptive force to whoever or whatever opposes the Kingdom of God and a healing, liberating power to those who seek it.
This is a good book, and I recommend it.