Nancy and I loved watching the Marines perform maneuvers. In the above video, we observed the plane landing and taking off.

This is a small airfield in Hearne, TX, and the military contracts with the powers-that-be to use it for training purposes.

Our hotel was filled with these young service people, and many of them were long-timers in the military.

Since they were on training drills, I assumed they were all recruits. Nope. Many had been in for years. 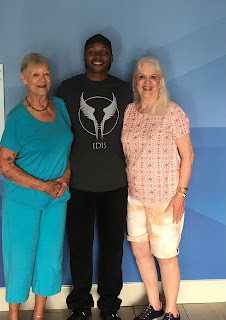 Nancy, Terrell, and Gay
Terrell has been a Marine for nineteen years and loves the Corps.
Nancy, Rick, and Gay
Rick and Terrell were checking out and planned to explore a bit of Texas before heading back to Okinawa, Japan, their base. We were fortunate to have their presence for two days, and they were interesting and informative.
We received permission to watch the group parachute from the plane. We were keyed up for this adventure. 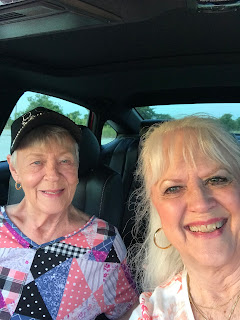 Even though we arrived at the airfield at 8:00 pm, it was still a hot, windy time. The guys had told us they would take off at 8:15. We drove as far down the gravel road as we could and then waited. 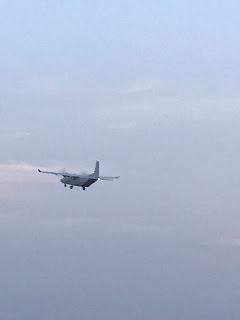 There were no delays with this plane! It taxied by us at 8:15 and was airborne a few minutes later. I waved like crazy when it ambled by us. A few of the Marines returned my gesture. 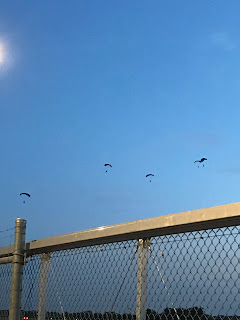 We were thrilled  about thirty minutes later when we saw the parachutes descending. 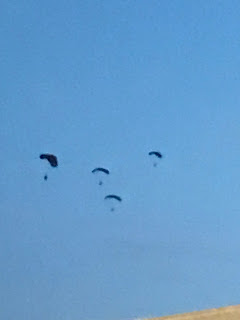 They look close, but I know they aren't. I asked if they felt like they were falling. One told me the velocity of the wind prevented the feeling. I don't plan to ever find out what he meant! 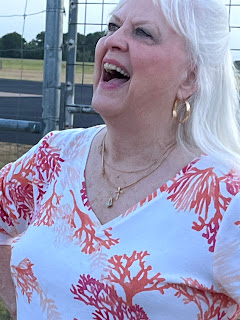 My friend, Nancy, captured my joy at seeing the men parachute from the plane. I'm a proud citizen of the United States of America. So is Nancy. 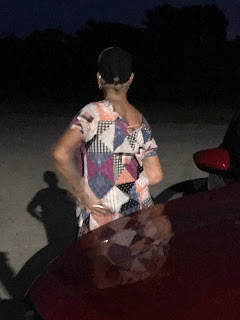 We waited after dark to see if they returned, but if they parachuted again in the blackness, it was too dark for us to see. When we heard a horse and rider approaching from a field, we decided to leave. After all, we were out in the middle of nowhere, and the Marines were up in the sky someplace, not close by to protect us from the unexpected.
Gazing at our Marines and their bravery is an experience to remember. 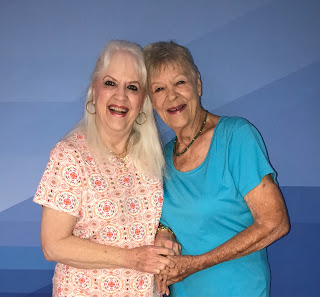 A girlfriend trip is a good thing to do too. I'm fortunate to have Nancy in my life. We've been freinds since we were kids. She married first, and I was her Maid of Honor, then a few months later, she was my Matron of Honor. No need to tell you how long ago that was!
Gay on Amazon
Posted by Gay N Lewis 1 comment:

The Marines: An Unexpected Vacation Find!

My forever friend from childhood and I met in Hearne, TX to spend a few days. Nancy lives in Irving, and I'm in Weston Lakes. Hearne is about halfway for each of us.

When we arrived at the Holiday Inn Express, we discovered the hotel was filled with Marines who were in Texas from Okinawa, Japan. They had arrived in our little central Texas town for training.
I called hubby and told him not to worry about us. We were safe. The Marines had landed. 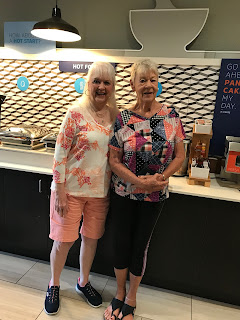 Here Nancy and I are at breakfast. She loved the cinnamon rolls and I scarfed down the biscuits with gravy. The Marine waiting in line behind me didn't soak his biscuit with the creamy stuff like I did, and I suggested he had a bit more to his plate. Since he serves in Japan, I thought he might not know about Texas biscuits and gravy. It turns out he was a native Texan. Maybe he watches his cholesterol more than I do.
The dining room at breakfast was filled with Marines, but I didn't take their picture. I found out later that it would have been okay for me to do so, but that was  a day or two later.
Nancy and I were in awe of these men who serve our country. We wanted to adopt them and be a grandmother to them.
I'll tell you more about them later. Stay tuned.
After breakfast, we toured Camp Hearne. It is a WWII historic site and exhibit. Over 4800 German prisoners were held in this POW camp. At the time, the population of Hearne, TX was less than 3500. 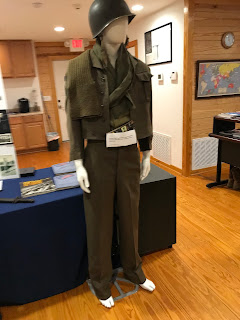 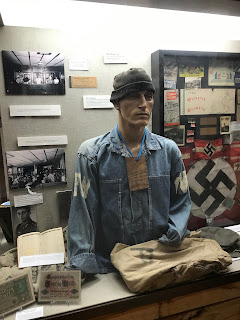 Our military chose Hearne, Tx out of kindness for these German prisoners of war. Central Texas would remind them of their home country. The prisoners from Hitler's Army were taken captive while serving in foreign lands and brought here to America, but Hearne was not the only POW camp.
They were treated well here in America. At Hearne, they had a double portion of rations and a normal workload. The site has remnants of prisoner-built amenities. There are over  thirteen hiking trails. Nancy and I didn't explore any of them. It was too hot! I think the temp registered 105 F that day, but on a cooler day, it would have been fun.
This POW camp had a stadium-seating theater with an orchestra pit. The prisoners dressed up in homemade costumes and performed plays from memory.  After their exposure to America, several brought their families here after the war and became citizens.
After Camp Hearne, Nancy and I toured the historic, Hearne Depot. We found out that Hearne is known as the Crossroads of Texas.
Bob Batson, Curator
Bob Batson, Curator, could write a history book with his knowledge.
Two railways crossed Hearne in 1869. The Houston & Texas Central (it is now the Southern Pacific) and the International (now the Missouri Pacific).
The Depot museuem contains a wonder of interesting exhibits. It has two waiting rooms for travelers back in the day. They are a mirror of each other and are identical. One was for the black travelers, and one was for white.
By the way, the Depot has a display dedicated to Aunt Jemima. 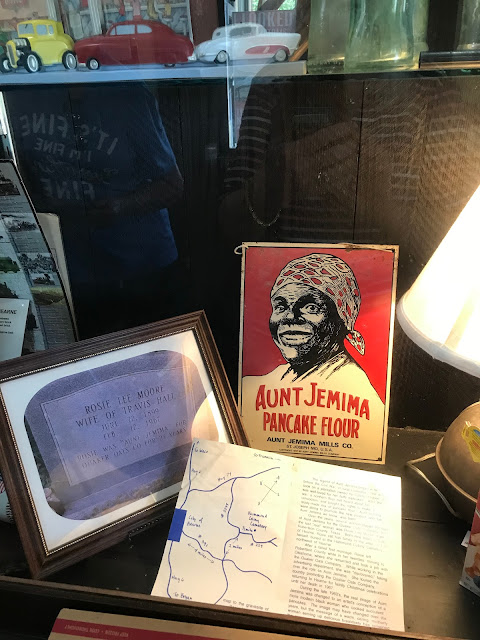 Rosie Lee Moore, wife of Travis Hall, was "Aunt Jemima" for the Quaker Oats Company for 25 years.  She's a native of Hearne.
I've driven through Hearne many times as I traveled to the DFW area and never knew Hearne had these  historic sites.
Hubby wants dinner, so come back for more stories about the wonderful Marines. I'll add them with pictures later.
After that hot day of exploring, Nancy and I retreated to the hotel. I had forewarned her that I turn the temp down to 65 F in the room. She brought extra blankets.
I can't wait to tell you about the Marines!
Gay's Amazon Page
Posted by Gay N Lewis No comments:

Adventures While on Vacation 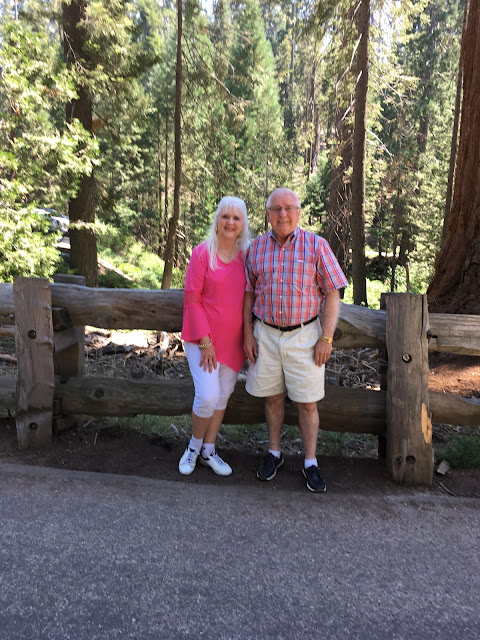 I love vacations. Here we are a few years ago in Yosemite. The weather was perfect, and we enjoyed staring up at the giant trees.

But hold to your hats!  This picture was taken before the fire.

Our tour group was trapped in the park until after midnight. A roaring blaze broke out, and we had to wait our turn to evacuate.  We stayed on the bus while the evening melted away in red smoke. We coughed a bit, too. The night we were trapped, it was so smokey, we covered our noses. Ashes fell on us, too. 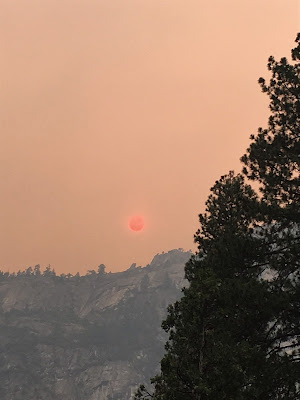 We finally checked into our hotel room, but there was no power, so we couldn't see. We used the flashflight on our cell phones. There was no electricity when we woke up either.

I always regretted that. The hotel where we were staying sat on top of a creek, or it might have been a river, it was too dark to tell. We could hear the water rushing, but we couldn't glimpse it till morning. It was a beautiful, rugged spot.

It seems fires are common in this beautiful park.  In fact, there's one burning 600 acres as i write this post. I'm glad I'm not trapped there today, but I'd love to go back and stay in that hotel, and I wish I knew the name of the thing. Not that I'll go back, but I'd like to.

If you click on the link, you'll see the smoke from the recent fire.

Have you been to Yosemite? If not, you should go, but be warned. You might have the adventure of a life time if you get caught in one ot their forest fires!