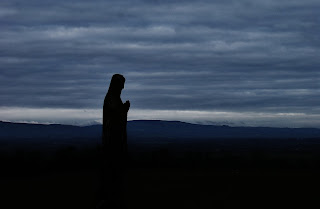 The story of Ruth and Naomi.

It's a beautiful story of love and family.

Naomi lived in the land of Moab due to a famine in Bethlehem. Her husband and two sons died, leaving her with two daughters-in-law. Somehow she heard that Bethlehem once more had bread. (Bethlehem means house of bread). She decided to make the thirty mile or more journey back to her native land.

Three women start out, but Naomi convinced Orpah, a daughter-in-law to turn back and stay with her own kin. She would have more opportunity for marriage if she did. Ruth will not turn back. She uttered that famous verse we find in Ruth: 1:16. "where you go I will go, and where you stay I will say. Your people will be my people and your God my God." NIV.

We hear that verse quoted often at weddings, but Ruth said it to her mother-in-law.  Can you imagine? I'd probably have said, "I love you and wish you well, but I need to take care of my own mom."
Now the trek back to Bethlehem wasn't easy. When one has been away from God, the road back isn't always the easiest, is it?
The road back was not easy, especially for two widows traveling alone. The Bible doesn't say if they occasionally met up with a caravan or not, but Scripture says they traveled along the road leading back to the land of Judah. This probable road was north of the Dead Sea. These women would need to descend from the mountain region near Mount Nebo, enter the Jordan River Valley, and then begin the gradual climb to Jericho. On the map below, you'll find Jericho just north of the Dead Sea. From Jericho, they'd have to go west toward Jerusalem and then south to Bethlehem.  If they could have crossed the Dead Sea by boat, it would have been closer. 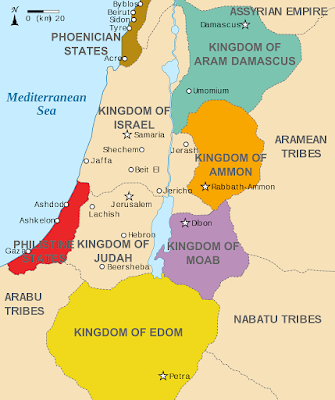 https://commons.wikimedia.org/wiki/File:Kingdoms_around_Israel_830_map.svg
And they had no GPS or map!
Brave ladies, don't you think?
That journey could take weeks. How about food? Perhaps people along the way gave handouts. No handy dandy motels existed either. Perhaps they slept side by side on the ground at night. No street light, only a moon and stars guided them until they found a spot to rest.
We can see multiple lessons in this story, but the one I want to focus on today is this:  These two widows had no idea I'd be talking about them today. They'd be shocked to read their names in Scripture. And............they'd be more amazed to how see Ruth is in the genealogy of King David and Jesus.
I don't know if I'm touching lives as I go about my day daily existence, but God knows. Maybe one day from on high, I'll be flabbergasted to see some of the choices I made helped transform a life down here.
You don't know the influence you have either. But like Ruth and Naomi, make the journey. Even if you can't see the road you're on.
BUT USE A GPS IF YOU HAVE ONE!
FAITH AND HUMOR