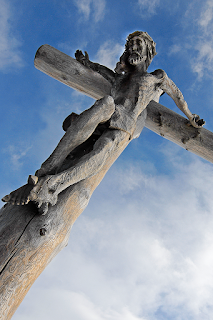 "The thief had nails through both hands, so that he could not work; and a nail through each foot, so that he could not run errands for the Lord. He could not lift a hand or a foot toward his salvation, and yet Christ offered him the gift of God; and he took it. Christ threw him a passport and took him into Paradise."  --Dwight L. Moody.


This guy, a thief, was nailed to a cross rising from the ground next to the one Jesus was on.  The dude was captured, could do nothing, but he asked for a pardon from THE KING, and he got one. He had no works to offer and no money to give. He didn't have long to live and no time to serve. Jesus, full of mercy and grace, gave him a new life.

Another man, a thief, was also nailed nearby. He was captured, and convicted. He never asked Jesus for a pardon.


These two men died. One went with Jesus. The other did not.

Make a choice today. Where will you spend eternity?