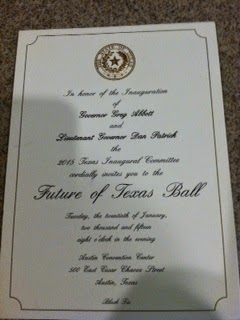 No, this invitation to the Texas Inaugural Ball isn't mine.

Youngest daughter and husband went last night to the gala in Austin, Texas.

I watched the swearing in of the Governor and Lieutenant Governor of the Great State of Texas on TV. The day was perfect for it...sunny, blue sky and about 70 degrees F.

Our daughter promised to send pictures of the ball, and I'll post them as soon as I receive them.  I'm eager to see her gown. She said the dress is blue and I've no doubt she looked stunning in it.  Son-in-law wore a tuxedo, and I'm sure he looked handsome as well.

They were invited to the entire day's events, but time only allowed them to attend the ball. They missed the outdoor inaugural, the barbeque and afternoon parties. I wonder if they returned home to San Antonio before they turned into pumpkins. Since the drive is close to two hours in traffic, I doubt they were in bed until the wee hours of this morning.

"Why were they invited?"  I hear you ask.

Good question. They aren't Republicans, and as far as I know, they don't contribute to political candidates, but they remain popular with influential people.  Son-in-law once escorted VP Biden around San Antonio.

Stay tuned. I hope to have pictures!
Posted by Gay N Lewis