Good morning friends,
What's planned for your day? I discovered two pounds on the scale this morning. I knew they were there, my jeans told me so. Yuk. Cutting calories and headed to the gym is my plan, and you know how I love that.
﻿
Here's an excerpt from my latest book.  Three reviews are on Amazon. One reader thinks Georgia is too much of a doormat. What do you think?
In Georgia's situation, she could have argued with her hubby more. Would that benefit her? She could have divorced him or had an affair. Would that have been the kind or the Christian thing to do? Georgia loves Alan, her husband, but will love die because of his attitude toward her?
Women and men who find themselves in Georgia's position face hard choices. ﻿ 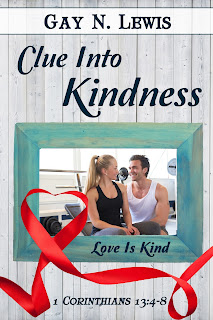 2.99 on Amazon
EXCERPT
Copyright 2016 Gay N Lewis
Georgia loved this Italian restaurant, and having dinner with her husband’s best friend, Ken, and his wife was a treat too. And to top it all off, Jana, Ken’s wife, had become her best friend. Fine food with companions she loved—an evening couldn’t be better.

At least until this moment, anyway. Georgia wished the topic hadn’t switched to political leaders.
“Georgia, you don’t know what you’re talking about. That guy is a bozo.”

Georgia cringed as though bitten by a scorpion. Why did he need to sound so condescending?
Ken winked at her and reached out to touch Alan’s shoulder.

“Hey, old buddy, don’t get all excited. The four of us can share different opinions, can’t we? Shoot, you and I’ve been friends since kindergarten. Have we always agreed? Nope—not hardly. Remember those days when we argued at recess? You wanted to play tag with the girls and I wanted to swing. I ended up going with you. Turned out well, chasing those little lassies was fun too.”

How kind of Ken to defend her after Alan’s embarrassing remark. Had her sweetheart harped on such things before they married? Georgia sighed. No, she didn’t think so—didn’t remember any. When they dated, he’d complimented her and seemed pleased with anything she’d said. If he’d made some of the observations he’d made today, she might’ve entertained second thoughts about the life-time commitment.

Jana sipped an iced tea. “Ken always defends the underdog. Don’t you, honey? He’s been like that ever since I’ve known him, but I agree with Alan. That politician is a bozo.”

Georgia toyed with a napkin. “I didn’t care for the way he voted on the tax issue, however he’s done well with other matters.” Who cared if this group failed to appreciate her opinions? She held the right to speak them, even though she risked her husband’s scorn. On the other hand, would this kind of reaction cause him to treasure her? Probably not. She wanted Alan to appreciate and value her accomplishments. Oh well, she’d keep trying to make him see her as special.

“Which day in our history did you become an expert on current events? When we dated, you were a party girl—the campus beauty queen. You weren’t tuned into politics.” Alan waved a dismissive hand as he spoke to Georgia. “Now, me? I’ve always been interested. I study the issues and learn what’s going on.” He wiggled a finger. “After three years of marriage, you’ve become a real know-it-all.”

“Maybe you’ve taught her a lot about world affairs.” Jana crossed her legs and shifted her weight. “You’ve shown Ken a thing or two. He watches cable television now—even reads the newspaper. I like having him at the morning table with me rather than sitting at the computer.”
How polite of Jana to smooth things over.

A server carried a large tray on his shoulder and the aroma of garlic drifted down to their table.
“I thought he had our order. I’m starving.” Alan viewed the dimly lit restaurant as if he hoped another server would appear with their meal. “I made sure my customers’ bread baskets were full to go along with their drinks when I waited tables in college. Our waiter doesn’t understand his job.” He held up a basket. “Look at this. This thing should be restocked with rolls, and the guy can’t bother to refill our glasses, either. He won’t get much of a gratuity from me.”

Jana nodded. “He’s forgetful but I’d hate not to give him the fifteen percent.”

“When a person does a respectable job, I tip twenty to thirty percent.”

“Perhaps he’s new.” Georgia lifted her eyebrows as she scanned the room.

“No matter. He needs to use common sense. When I held his position, I earned more money in tips from satisfied customers than all the servers combined. The staff couldn’t figure out how I did it. I used my head and checked on people.”

Georgia patted Alan’s arm. “You did well, honey. You took me to some elegant places during those days. We even went to restaurants similar to this. Alan was very romantic back then.” She fingered the white table cloth. “Our favorite Italian bistro sported red-checkered cloths and candles instead of this neutral color.”

“If I’d known Ken through college years, our dates might have been hot dogs and free movies.” Jana touched her husband’s arm and gave him a wink. “And I’d have loved every minute of it. Too bad I didn’t meet you earlier.”

“I wish you’d been around, too. Hot dogs would’ve tasted gourmet with you there.” Ken shrugged. “The paycheck from the campus bookstore was small—Alan earned more in the restaurant, but I enjoyed the job. Reading has always been a hobby to me, and now as editor of Always Texas Living, it’s my career.”

“But we didn’t take the paper in the early days of marriage.” Jana’s tone carried a hint of reproach, however she smiled apologetically and glanced at Georgia. “A long-time habit. Had to have my newspaper first thing with coffee.”

Now why couldn’t Alan be more like Ken? How she longed for cozy moments similar to the ones her friends shared. Georgia tried to ignore the gnawing ache of loneliness in her heart.

“Alan finally convinced me to subscribe to the Houston Chronicle. Before the paper, I got information solely off the Internet. Good job, old buddy.” Ken lifted a water glass in a mock toast. “Thanks. The newspaper helps me with work. You can’t imagine how many ideas it generates for me.”


“Glad I helped.” Alan searched the room again for the server and scowled. “Where is the waiter?” He turned his attention to Jana. “Ken wasn’t as fast on his feet as me—never has been. I always tagged the most girls at recess.” He gestured—palms up. “Maybe that’s why I liked it so much. Did you know I ran track in high school? I switched to baseball when I entered college. My speed and good arm earned me the position of shortstop on the team. Found it difficult to maintain my GPA, work at night, and take on athletic duties during the day, but I did it.”

“I keep Alan’s trophies in the bookcase. I’m sure you’ve seen them. He has many accomplishments, past and present.” Georgia smiled at Jana. Maybe that remark will please Alan and win some points for me. Hope so, anyway.

Jana performed a subtle eye roll. “Yes. He pointed them out once and described each event. The awards are good mementoes of former days. Ken often talks about those high school meets and university ball games. We don’t have plaques or medals at our house. We aren’t athletically inclined.”

Ken and Jana grinned at each other.

Georgia blotted her lips and returned the napkin to her lap. “Alan runs five miles every morning. I’m so proud of him. Rain or shine—he’s out there.”

Alan patted his abdomen. “Got to keep the six-pack in shape.” He pointed a finger at Georgia. “When are you going to start jogging? Your waistline could use some attention. You’ve gained a few since our wedding day.”

“You’re right, but I’m content to merely walk a mile or two.” Georgia clutched her hands in her lap.
“You should join me sometime for yoga class.” Jana glanced at her watch. “My session usually meets right now, however the class for tonight was canceled.”

“Yoga might be okay for stretching, but it won’t burn as many calories as a decent run. I’ve tried to convince Georgia to go with me every morning. An early jog is beneficial for the metabolism, and it spawns more energy. She’s gained three pounds—one for each year we’ve been married. At this rate, she’ll be fifty pounds heavier on our golden anniversary.”

Why must he publicize such things? Georgia determined to show no response. Was her smile placid? She hoped so.

“Are you going to train for the marathon?” While toying with his spoon, Ken directed his question to Alan.

All this bragging is bound to bore Jana. Georgia focused her attention on her friend. “Are you enjoying your promotion? I can’t imagine sitting at a desk all day and analyzing data on spread sheets.”

“The work overwhelmed me at first, but I love it now.”

“New employment can do it. I remember when I initially joined Wick’s Pipe and Fitting, I was uncomfortable, but it didn’t take me long to find my groove. Of course, I’m a people person, and selling has always been my thing.” Alan’s proud grin reminded Georgia of a cat she’d once seen who’d hidden a songbird in the bushes.

The server appeared, placed dishes in front of them, and mixed up the orders. Alan frowned. “I asked for lasagna, and Ken ordered the grilled chicken.” He switched the plates. “Georgia wanted fettuccini, and Jana requested spaghetti. Ladies, trade your platters.” He squinted at the waiter. “Would you bring bread and refill the tea glasses.”

With a red face, the server nodded and scurried off.

“Honestly. Did you ever witness such incompetence?” Alan expressed his opinion loud enough for the retreating employee to hear it.

Georgia picked up her fork and poised to eat. “Oh, it’s okay. No harm done.”

Alan scowled. “Perhaps not, but even if you don’t agree about politicians, why can’t you see eye to eye with me regarding the waiter?”

“Sorry. I guess you’re right. He has a lot to learn.” She turned her head toward Jana. “How’s your spaghetti?”

“This chicken is good, too.” Ken leaned in to kiss Jana. “But not as juicy as yours. My wife treats me to fantastic suppers and her grilled chicken is a favorite of mine.”

Jana beamed. “Thanks. I use Mom’s recipe. I marinate with secret spices for a minimum of six hours before I place it on the grill.”

“Georgia does okay with spaghetti and meat sauce from a jar. She’s not a fancy cook.”

“And it’s a good thing I’m not a food expert. How else could I help you keep your six-pack in such excellent condition? If I were a gourmet chef, you might need to run ten miles each day.”

Three of them laughed as though she’d told the best yarn of the century.

Georgia glanced at Alan. He hadn’t found merriment in the comment. Maybe her statement sounded too unkind. Well, she’d make it up to him. This man owned her heart. No way did she want to hurt him.