Good morning friends from down here in Houston! I hope you'll read Julie B Cosgrove's touching story about her siblings. I found myself wishing I had siblings to come to my aid and defense--such as the ones Julie has. How about you? Do you have kind siblings?  I hope so.
Sibling Love 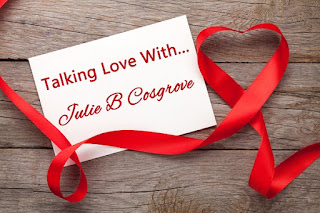 I guess most sisters bicker as they grow up. We have a tendency to be a tad jealous of each other. “How come she gets to…” and later, “Why do all my boyfriends notice her?” Even later, “Why doesn’t my husband treat me like hers treats her?” or “”Why are her kids so well-behaved?”
My sister and I are six years apart so by the time I entered my teens she was married. I felt a deep loss and for a long time I felt the odd person out. She and my brother’s wife were closer in age, so they bonded. They always huddled at family events. I felt the pangs of exclusion like the wimpy little kid slumped on the sideline bench whose muscles would never fill out his uniform.

Until my husband died suddenly in the shower getting ready for work. Though five hours away, my sister dropped her life and rushed to my aid. She boarded her animals at the vets, packed a bag and drove to my door. I honestly cannot tell you how long she stayed with me. Certainly until after the funeral five days later. Having lost her husband a year previously, she guided my numbed mind and aching heart through the planning, the visitations and the arrangements as I sniveled for days on in overwhelmed by it all.

When I sold the house and moved to a one bedroom apartment, all I could afford at the time, she returned. We spent hours rubbing masking tape onto the floors mapping out where furniture would go and plotting what I could bring and what I should leave behind for the estate sale. She then monitored the estate sale like an award winning  car salesman, raking in the bucks so I could afford the moving company.

My brother, an attorney, drove in to handle all the legal affairs pro bono without blinking an eye. All I had to do was show up at the courthouse and swear my husband to be deceased—by far my highest hurdle. Declaring him legally dead before a magistrate made it real, too real. My brother stood by my side as my knees quaked. His even-toned professionalism became my boulder. I watched, wide-eyed and tear-blinked as he handed off paper after paper to the court clerk. Documents all identified by letters and numbers which I never understood.

Growing up, my brother seemed a phantom. Eleven years older than me, he was a teenager locked in his world by the time I could toddle. Then came the college years away. When I was in third grade, he walked down the aisle. After that, he moved away, had a child of his own and built a life. Eventually I did the same. For decades we acknowledged each other like shadows at family gatherings. But that day at the courthouse, he became flesh and bone to me.

God purposes good from tragedy. My husband’s passing brought me closer to my siblings and showed me what family-bound love is all about. Five years later, we are able to communicate at a deeper level, share our feelings openly, and be there for each other through this rollercoaster called life. Now, that’s true love— a love akin to no other on earth. 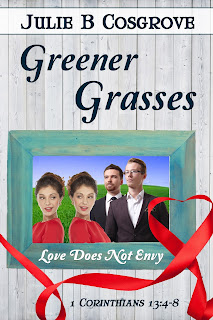 2.99
Greener Grasses
“Love does not envy…” 1 Corinthians: 13:4
Twin sisters, Erin and Ellen, covet each other’s lives and husbands. Their festered envy has not only kept them at arm’s length for almost two decades, it has placed both on a precipice of divorce— something they’d never admit to each other.

Yet after two weeks together with their spouses, as they sort through their mother’s belongings following her funeral, they discover the flaws in their sibling’s “grass-greener” lives. But will that revelation help each sister appreciate her own husband and lifestyle as truly according to God’s plan? Or is it too late for a change of heart?