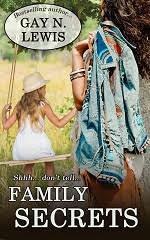 Dallas, Texas, 1975. A dark time in history but also a time of change. President Kennedy had been assassinated twelve years earlier. Although civil rights were revolutionizing, Dallas schools weren’t integrated until 1971.
Rebecca Davis, a nurse, has suffered racial bigotry, and due to it, she hasn’t seen family in fifteen years. They hid secrets from her, and she won’t forgive them. Ever.
A drunk man killed Marshall Donavan’s wife and baby. Marshall, a minister, can’t forgive the drunk and feels like a hypocrite to his church for preaching forgiveness.
Sam Bradford, former druggie, has forgiven himself for his foolish Woodstock behavior. He and his five-year-old daughter, KC, love Rebecca, and Rebecca loves KC—the daughter she can’t have.  Due to her secrets, Rebecca vowed to never marry.
Marshall develops a friendship with the reluctant Rebecca. Rebecca tells both Marshall and Sam that friendship is all she can offer.
Sam, unaware of Rebecca’s friendship with Marshall, is shocked to find him and Rebecca in the hospital cafeteria. The chemistry is obvious. Conflict arises and Rebecca finds herself caught in an emotional tug-o-war between the two men.
Is it possible to love two men at once? Rebecca is distraught, but regardless, she can’t marry. The only solution? Move away.
Desperate not to lose her, Marshall convinces her to reveal to Sam and him the skeletons in her past.
Rebecca was engaged fifteen years earlier. When her fiancé’s father discovered Rebecca’s Cherokee, Indian blood, he grew angry. The aristocratic, narrow-minded, father determined Rebecca not good enough for his son. To prove her unworthy, he hired detectives to unravel family history and revealed the detective’s report hours before the wedding ceremony. Her parents were not who she thought they were. Her fiancé abandoned her.
After her disclosure, Marshall and Sam assure Rebecca they don’t care about her DNA, but she believes marriage legally impossible due to laws preventing marriage between cultures. Marshall informs her the Supreme Court had overturned such laws in June, 1967. Even though pockets of racial hatred existed in Dallas and other places, the views of inter-racial marriage were changing. Legally, she was free to choose one of them to marry—but her heart is bound to both. She loves them both but in different ways, and what happens to KC if she chooses Marshall?
Which man should she choose? Only God can bring about a solution to her dilemma.