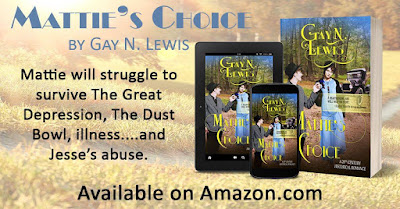 I've asked Mattie, the character in Mattie's Choice, to tell you a bit about herself.

Gay, Thanks for asking me to introduce myself to your readers. I'm  a little shy, but I'll try. I'm Mattie Colby and I grew up in a loving home in rural Oklahoma. My father aquired land in the Oklahoma land rush of 1893. My mother's ancesters endured the Trail of Tears. My twin brother, Maury, and I are the oldest. We have three sisters. Maury is my best friend. He was sad when I quit school to elope with Jesse.  I've wanted to be a wife and mother for as long as I can rmember. Maury wanted me to go to college with him, but back in that day, women didn't have careers. In 1925, our goal was to become wives and mothers.

I’m pretty good at keeping secrets.  Early on in marriage, I was stubborn to a fault. I think my pig-headedness was what kept me going. I didn’t believe my dad would help me, and I learned too late that he would have. I had too much pride to ask. Courage? I think I developed it as I grew older. Courage comes with self-confidence, and as I became confident, I became courageous. Does that make sense? If I could do it over, I’d have chosen to become assertive much sooner than I did. Keeping my beliefs and standing up for myself turned out to be the best choice in the long run.

My husband wasn't easy to live with. In fact, he was downright awful at times. Life circumstances were difficult too. The Great Depression, the Dust Bowl, and the world events made life unbearable at times, but my faith grew stronger through the trials. That was a good thing. Some, like Jesse, grew angry with God because of the hard times. I chose to stay close to Him and trust. Another good thing. My marriage with Jesse brought me eight children. Eight blessings. And guess what? Every one of them are productive, successful, God-fearing adults. Four are in the ministry. Like a rock thrown into water, the circle grows bigger, and in my case, a lot of good is in the circle.

Thanks, Mattie, for saying hello. I know readers will like you and your story will help many.