Sarah at the North Pole 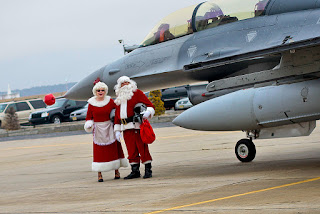 In six months, Santa will be here, but I'm thinking about him today.

I'm writing a Christmas story and it's due in August. Sarah, my haphazard angel is helping Santa, his wife, and elves. I'm having a lot of fun this hot June thinking snow, North Pole and Santa.

In this scene, Sarah watches the elves at work.

Red Berry proved himself as a real gentleman. Tall for an elf, and with a shock of red hair, he was affable in his long green coat and leggings. Sarah liked him right from the get-go. He insisted the group call him Berry but that Mona elf refused. Was she a meanie or what? She insisted on calling him Red or Red Berry.  Berry supervised the conveyor belt of toys. Did a good job, too, at least in Sarah’s limited opinion.

But Hap was Sarah’s favorite. Mona had nicknamed him Haphazard. Like Sarah, Hap was clumsy, fell down often, spoke phrases incorrectly, and made a mess of his work. Mona had made fun of him for dressing improperly. He’d come into the workshop  earlier with his coat on backward. And then he’d goofed at the assembly table. Everyone laughed themselves silly when he attached legs on a baby doll where arms were supposed to be. Sarah had chuckled at the odd-looking doll—legs protruding straight out of arm sockets, and hands where feet should be, but she’d been ashamed of her mirth. She wasn’t laughing at Hap, just at the odd creation. Nevertheless, she knew how he must feel. Her dyslexia caused humans and angels to be unkind to her. Sarah resolved to befriend Hap if she could.

When Sarah's Christmas story is published at holiday time, I hope you'll read it. It's a fantasy designed to give you a giggle.

In the meantime, how about reading another Sarah book? You'll find them on Amazon and other fine online book sellers.