While I spoke to a friend on the phone yesterday, I glanced at my front door and found a critter of some kind at the top on the facing. Now I hate to kill varmints of any kind. They scare me and give me the willies, but I didn't want to leave the room and allow that thing to do whatever it planned.

I finally decided to open the door, hit the "bug" with a towel and hope the thingy would fall outside. I didn't have a plan "B."  So if the creepy-crawly decided to attract me in self defense, I might have fainted.

The insect left my door and flew out, but I don't know if it left my house because I hit it with a towel or because I screamed like a banshee.

Here's a picture.  Anyone know what this creature was?  I named it Unwanted. 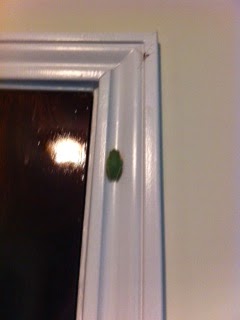 Our front yard has eight trees, so I imagine Unwanted might have come from one of them. I hope he/she never returns to the inside of the house. Unwanted is unwelcome.

I'm planning on buying either a new Kindle Fire HDX 8.9  or an iPad. I'm told the iPad does more, and it has a bigger reading screen, but it wouldn't be as easy to carry around. Which one should I purchase?  I hate making tech decisions. We just bought a Smart Bar for the TV, and hubby had no problems setting it up.  The young salesman told me it that I can hear my audio books if I set it to do so.  I haven't done that yet. Critters are not the only things that make me cringe.

The salesman at the store showed me an iPad and recommended it over the Kindle. I had him type in Gay N. Lewis and he was amazed when Amazon brought up my books. He said, "I've met a celebrity." I smiled and said, "Not really, but thanks for thinking so." He said the iPad would be familiar since I have an iPhone and I might find it easier to use.  Leave a comment with your thoughts. Which one? iPad or Kindle?   If you know what Unwanted is, let me know that too.

My coffee is cold. Time for a fresh cup. Ya'll have a good one!