Gay's Days. I have no idea where I am 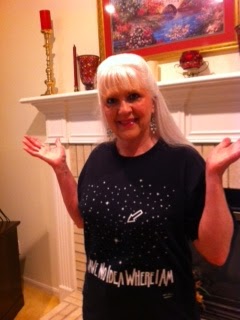 One of our daughters gave me this t-shirt, and does it ever fit me!  If you can't read it, it says "I have no idea where I am." There's an arrow pointing to a star. I like to think it's for Sarah, my little angel who never knows where she is either.
I’ve never had a sense of direction—it comes from my mother’s side of the family. My dad never needed a map to go anywhere. I remember him telling the story about a trip he took with my mom and her brother. They left Fort Worth headed to Birmingham, Alabama. My dad always drove, never liked to stop, and would continue into the wee hours of morning. This was during the days of no inter-states, so it took longer.


On this occasion, he grew sleepy a few miles past Meridian Mississippi. He pulled over, hauled himself into the backseat, and told the duo, my mom and her brother, to stay on the road.


My mom, who was the co-pilot, answered, “We’re just now coming into Meridian, Mississippi.


My dad responded with his Army language. ***bleep***!  That’s where I gave you the wheel.”


They’d made a complete circle and were coming back into the place where he’d turned over the driving chore. Needless to say, he didn’t do it again.


Sarah, the star of my series, is dyslexic and never knows where she is. In her latest adventure, she even worries about getting lost on a cruise ship. In this scene below, she appears as human female as she tries to help her charge, Carolyn.


Ash waved a hand. “I’m just kidding. You don’t cause disasters, do you? A little thing like you?”
Sarah, disguised as Cynthia, nodded. “I struggle to be normal, but I’ve had mishaps before.”


“What sort of disasters have you caused, and how many? I’ll figure our odds of seeing you cause one while you’re on the boat.” Jason’s tone indicated genuine interest.
“Start with the jewelry store caper.”


“How’s that?” Jason turned his head to Nick.


“She knocked over a rare and expensive Waterford bowl—almost caused it to shatter on the floor.”


“That could happen to anyone—doesn’t sound much like a catastrophe. What else?” Jason continued with his questions.


“Well, one time I needed to make a car go forward but I don’t know how to drive so I backed into a vehicle behind me.”


“You can’t drive?” By her expression, Dana found this unbelievable.


“If we’re ever on land together, I’ll give you a lesson. I’m a good teacher.” Ash smiled.


“You got an armored tank? You might need one.” Nick directed his inquiry to Ash.


“Aw, come on Nick, she can’t be that bad.” Ash responded with glee.


“What else have you done?” Jason’s evident curiosity grew by leaps and bounds.


“I get lost a lot. Once I was supposed to be in Houston, but I landed in Dallas instead.”


“That makes no sense. Did you board the wrong plane?” Jason frowned.


“To this day, I’m not sure how that came about.” Sarah shrugged.


“Strange. Anything else?” Jason withdrew a pocket calculator.


“I unintentionally caused a waitress in a restaurant to dump huge platters of steak and gravy on a customer.”


Jason punched in numbers. “Go on.”


“Do you really want to hear this?” Sarah glanced at the others.


“By all means, don’t stop now.” Nick drummed his fingers on the table.


“I once injured a man while I tried to walk in stilettos.” Sarah turned to Dana. “I love those shoes, but I can’t stay upright in them—I keep falling down. One time, while trying on a really cute green pair, I lost balance and pulled a tablecloth off a table. Caused all the dishes to smash to the floor and break.”


Nick twisted his mouth. “Lady, you are a real piece of work.”


Jason finished his calculations. “I’d say the odds of you doing some calamity on the ship are about 10 to l.” He looked about the group. “Anyone want to make a wager?” 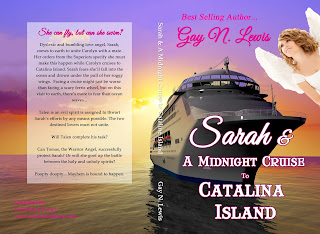