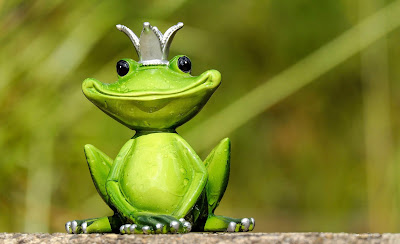 Have you kissed the Prince of Frogs lately?

Frogs are everywhere these days. I know some people who collect them. I don't collect them, but I have one in the flower bed. 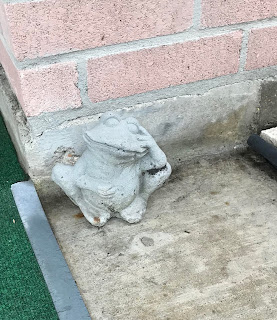 I'm not sure how this little fellow came to sit there. He looks rather ghostly. I should get hubby to paint him green.  He has no name.

My friend collects ceramic frogs and names them. Would you believe she has one named after me? The last time I visited her, he sat on the front porch. She would say, "goodbye Gay Nell, eat the bugs while I'm gone." This frog was her official greeter and bug eater.  I don't know the frog's gender, but he/she has my name, and I'm definitely female.

I once had a baby frog sleep quietly in my bathroom. I guess he slept. He never moved. I don't kill bugs, and I don't remove them to a safe zone. Hubby was gone, so I let the petite guy stay there. I went to bed and hoped he'd be gone by morning.

He was still in the same place.

Yuk! What to do?  When I came out of the shower, he was missing. I inspected the floor and didn't see him. Heaven forbid if my barefoot stepped on him. Oh mercy, I'd need the EMTs.

As I dressed, I kept looking for my new, unwanted friend. I finally saw him inside the toilet. I guess he got thirsty.

Well, you can surmise what I did. If that frog survived the deluge of the water, he's swimming somewhere below us.

So why am I talking about frogs today?

Hubby preached about the ten plagues God put on Egypt, and frogs were one of them. Can you imagine frogs everywhere? There was no indoor plumbing back then. You couldn't flush them away.

Exodus 8:3 says the Nile would produce them, and they would be in your bedroom, on your bed, in the ovens, and even in the food.

How gross is that?

That's too many frogs to make soup or fry frog legs that are supposed to taste like friend chicken.

In romance, we women often think of frogs or princes. Sometimes the guy is either a frog or a prince.  Fairy tales from long ago continue to promote this idea.

The goal for today is to kiss your frog.

If your guy is a prince, kiss him. If he's a frog, kiss him anyway. The kind, gentle gesture just might turn him into your prince.
On Amazon