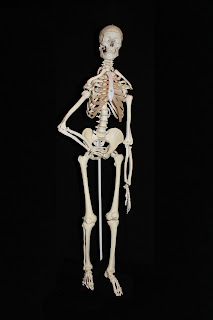 Ezekiel saw a bunch of them.

An Army of Skeletons!

The human, adult body has 206 bones.  If you're buried today in a casket inside a vault, and placed six feet under, it takes 50 years for your flesh to dissolve and you become a skeleton.

A few years ago, when people were buried in pine boxes, it took a year to become a skeleton.

We've come along way, right?   Who wants to be bunch of bare bones within a year?

In Ezekiel's vision, God put tendons, muscles, and flesh on thousands of bones as Zeke watched. The sound of bones coming together resembled an earthquake.

Not get this. All those bones had to find their counterparts. A six foot frame wouldn't join properly with a five foot body. Ole Zeke must have been enthralled as he gazed at the puzzle of bones finding each other.

After the bones located each other, Ezekiel prophesied for the breath of life to come, and it did. The bones became people again!

As I thought about this, I wondered when all of today's buried people would get flesh. Would it be in the casket before the resurrection, or would flesh appear as we leave the casket to meet Jesus in the air?

Do you want your flesh to return to you before you leave the casket? As you know, I write fantasy, and my mind wonders about crazy things.

I want flesh before I go up, and I want clothes too.  Just think!  Cloth turns to ashes too, so you'll need modern covering for that new flesh.

What will you wear to meet Jesus? Sweats? Ballgown? PJ's? Church clothes?

He desires to see the clothes of salvation on you. That's what matters to Him.

If those salvation clothes aren't in your closet, ask Him today to forgive you of sins and come into your life.