This article was originally posted in 2013 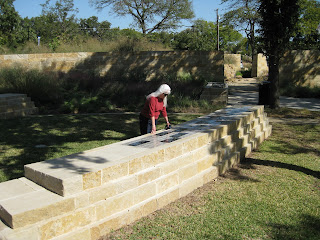 REMEMBERING MY DAD
Irving, Texas Memorial Park
MEMORIAL DAY
During my mother-in-law’s lifetime, she carried flowers to the cemetery at this time of the year.  Back in that era she called it “Decoration Day.” With no car and no knowledge to drive one if one had been available, she arranged for someone to take her to the cemetery—a twenty mile round trip. A short distance by today’s standards, but back then, it wasn’t.
Of course she took blossoms on other occasions, but she expressly wanted to remember on this patriotic event the fallen men and women who made the supreme sacrifice for her country.
Most historians believe the practice of remembering the soldiers with flowers sprang up around 1865 when liberated slaves decorated graves at a former Confederate prison camp. This site contained a mass grave for Union soldiers who died in captivity.

Before this date became known as Memorial Day, the 30th of May, 1868 was set aside as Decoration Day. The purpose was to decorate the graves of those who died in defense of our country.  These men and women lie buried in every city, village and churchyard in the land.
The alternative name of "Memorial Day" was first used in 1882. The new name became more common after World War II, and Federal law declared it the official name on June 28, 1968.
Many will gather today in backyards for barbeque, drink alcohol, play games, and swim in pools—for many, it will be a fun and relaxing time away from work. Grills will smoke with meat and the aroma of hamburgers and brisket will tantalize the taste buds.
Smoke on the battlefields will also be part of a soldier’s life this very day. The smoke will not arise from a backyard grill and fun times.  Men and women fight on foreign shores for our freedom. Improvised Explosive Devices will go off. Rifles will blaze. Fires will develop. It will not look pretty nor have a fragrant aroma. No fun in this scenario.
May God keep them safe and bring them home.
Let us pause at this solemn interval to give thanks for those who shaped our freedom in the supreme way.
Fly the flag. Decorate the graves. Pause to give thanks.
Posted by Gay N Lewis