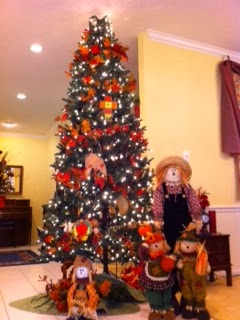 Have you ever wished Thanksgiving and Christmas didn’t fall near each other on the calendar?  The proximity makes it difficult to decorate for each one.


The tree above was simple to do.  Garlands of fall leaves don’t require much time, and placing scarecrows among the branches add to the charm.  Anything works.


Her hobby was decorating for each holiday.  She kept two huge trees up all year long—one in the living area and one in the master bedroom.

I don't keep a tree up through the year, but I enjoy it for Thanksgiving and Christmas. I also enjoyed my career as a designer. 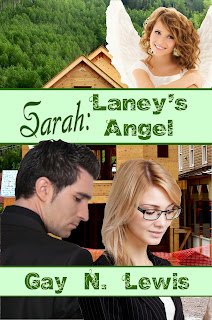 In Sarah: Laney’s Angel, I wrote from personal experiences.  However, designer Laney did not work with individuals. She attempted to build her design firm by working solely for a Houston builder—a very handsome builder—and she wanted to deny his charismatic effect on her.  If she failed to deliver floor plans on the agreed contractual basis, her job would end. When Cannon Carlson decided to pursue Laney and mix business with pleasure, Laney’s angst grew by leaps and bounds.


Sarah: Laney’s Angel is the second book in the Sarah series.  Sarah: A Mission of Love is the first, and the third one, Sarah and the Widow’s Mate arrives in time for Christmas 2013.